Harris is the first woman and person of color elected as U.S. Vice President 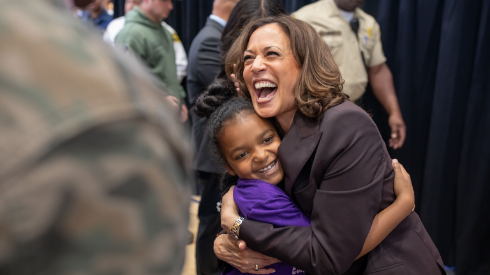 Kamala Harris hugs a young child at a campaign stop before the pandemic. Biden campaign photo 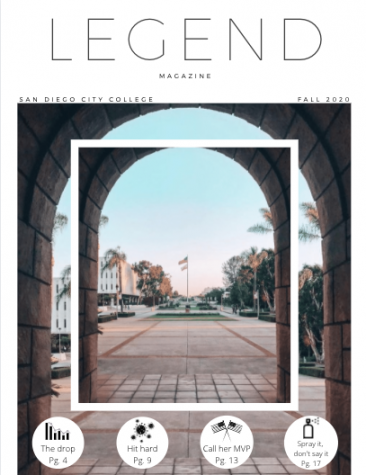 This story originally appeared in the fall 2020 edition of the Legend Magazine.

President-elect Joe Biden chose Senator Kamala Harris as his running mate after the Democratic National Convention decided that he would represent the Democratic Party in the 2020 Election, running against President Donald Trump.

Kamala Devi Harris was born in Oakland, California to parents, Shyamala Gopalan, an immigrant from India, and Donald Harris, who is originally from Jamaica.

City College President Ricky Shabazz shared in a post-election forum how the historic victory will influence young children, including his 11-year-old daughter.

“The single predictor of future success is hope,” Shabazz said. “Having someone like Kamala represents hope. When you do ascend to those positions, you realize countless others who may not even know it was possible either. You are living proof now that it is possible.”

After Harris graduated high school, she attended Howard University in Washington D.C., where she interned as a mailroom clerk for former California Senator Alan Cranston, led the debate team, chaired the economics society, and was part of the Alpha Kappa Alpha society. She got a degree in Economics and Political Science from Howard University.

Harris went to law school at the University of California, Hastings College of Law, where she was president of the Hastings chapter of the Black Law Students Association. In 1998, Harris was recruited by the former San Francisco District Attorney Terence Hallinan as the assistant district attorney.

In 2000, Harris took a job at the San Francisco City Hall, where she ran the Family and Children’s Division, which represents child abuse and neglect cases.

Denise Whisenhunt, City’s vice president of student services, mentioned the importance of having representation in the White House after Harris was picked to be Biden’s vice president.

“Emotionally, it was affirming, being as I am an African-American woman and she is too,” Whisenhunt said. “It was just an important message to a lot of women, regardless of color, that the time is right. Particularly, the past four years, we haven’t had that representation.”

Whisenhunt said that “women have been leaders all along” in regards to how Harris’ victory is indicative of where this country is headed in regards to representation in politics.

After her time as DA, Harris served as California’s state attorney general from 2011-2016. Harris was the top contender to be California’s senator after Barbara Boxer announced her retirement in 2015.

The California Democratic Party held their convention in February 2016, where Harris was endorsed for the senate race by almost 80% of the votes. Harris then defeated Democrat Loretta Sanchez in the general election.

In January 2018, Harris was appointed to the Senate Judiciary Committee after Senator Al Franken resigned. During her time on the committee, Harris was known to be tough when questioning anybody who was testifying in front of the Judiciary Committee, like Associate Supreme Court Justice Brett Kavanaugh, Attorney General William Barr and Facebook CEO Mark Zuckerberg.

On Aug. 11, 2020, Biden announced Kamala Harris as his pick for vice president. Controversy over Harris’ record as San Francisco’s district attorney, along with conspiracies and other claims found to be baseless immediately followed.

City College gender studies Professor Kelly Mayhew said the conspiracy theories and controversies that followed Harris after she was chosen by Biden to be his vice president didn’t surprise her.

“Trump, in particular, trotted out every racist, misogynistic stereotype he possibly could,” Mayhew said. “Calling her a monster. Calling her angry. It’s not surprising at all.”

Mayhew said the record-breaking votes that gave Biden and Harris the victory was cultivated by those pushing back against the attacks.

“A lot of women were really angry and sick to our stomachs, and especially black women, because those are those stereotypes that black women in our country have been subjected to since Africans were brought to this country as enslaved people,” Mayhew said.

Jessica Castro, a City College student, said she was worried that Biden picking a woman for vice president wouldn’t help him win the election.

“(Still), it was great that a woman of color was being picked for that position,” Castro said.

“… It was great that a woman of color was being picked for that position.” – City College student Jessica Castro

Castro wants the Biden and Harris administration to fix issues and policies that she takes seriously. This includes environmental policy, protections for DACA and for the children separated at the border to be reunited with their parents.

Want your name to appear on a story in the next edition of Legend magazine? Enroll in DJRN 210 for the spring 2021 semester. Start the enrollment process here.