VIDEO: California to set aside 40% of vaccines for underrepresented communities

The plan is a first in the nation 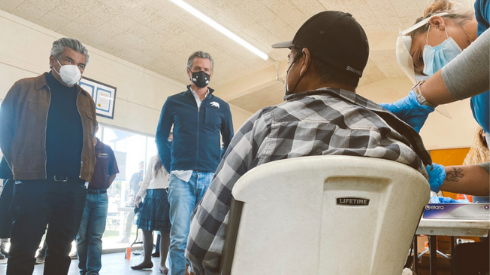 California is planning to begin distributing 40% of its coronavirus vaccine doses to the most vulnerable communities.

The doses will be shared between 8 million eligible people in 400 ZIP codes across the state.

The criteria for underrepresented communities include housing situation, income, access to transportation and education level.

South San Diego communities that have been hit hard by the pandemic are also included in the targeted group.

“This is what we’ve been fighting for from day one,” County Supervisor Nora Vargas told KPBS.

The latest on vaccine distribution can be seen in this week’s episode of Newscene, the award-winning student-produced weekly newscast.

State officials will also make it easier for counties to move into less restrictive tiers once 2 million doses of the coronavirus vaccine have been distributed.

Changes are expected to be implemented next week and will not affect anyone who is currently eligible to get vaccinated.

Analytica Consulting of Scripps Ranch completed the study, which was completed after a request from city officials.

Stimulus relief debate continues in the Senate: President Joe Biden has agreed to lower the income eligibility on the next round of stimulus checks.

This will cut off 7 million families originally eligible for the relief payments.

Adult dependants and college students will be able to collect a stimulus check for the first time.

Abbott said mask mandates were no longer needed because of the advancement of vaccines and therapeutics that prevent COVID-19.

His new executive order is set to go into effect on March 10.

San Diego native Andra Day wins big at the Golden Globes: Andra Day, who grew up in San Diego, won best actress for her performance in “The United States vs Billie Holiday.”

She graduated from San Diego’s School of Creative Performing Arts, which didn’t waste any time to congratulate her in a tweet on Sunday night.

DRUM ROLL PLEASE … Golden Globe for BEST PERFORMANCE by an Actress in a Drama Motion Picture is awarded to … ANDRA DAY!!!!!

Rise with us as we give Andra Day a STANDING OVATION!
Sending you heart and a loud shout: CONGRATULATIONS.
We are very happy for you. pic.twitter.com/bDlaE7vkYo

Comic-Con is canceled for the second year in a row: Comic-Con will not be held in person due to COVID-19 concerns, officials announced.

Taking its place is [email protected], a virtual event happening July 23-25 that will be free for fans. The event has been shortened from four days to three due to financial problems.

WonderCon, Comic-Con’s sister event, will also take place online in April. Organizers hope to have an in-person event this fall.