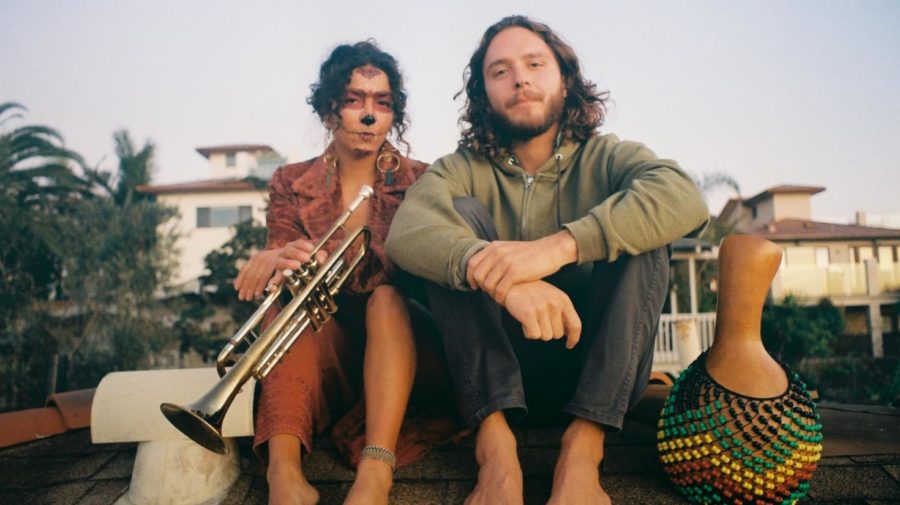 When Mitchum Yacoub (right) heard Divina Jasso (left) sing to his instrumental track “Cumbia Divina,” it was clear for Yacoub that the song had to be rearranged for her. So the two wove together the sultry cumbia. Piper Kay Robison photo

We’re back with our second monthly playlist of local music and it’s packed to the gills with tunes from across the musical biosphere.

From the mesmeric psychedelic meanderings of Calcutta Kid, to the horn-laden cumbia of Mitchum Yacoub, to the searing hardcore punk of Negative Blast, there’s a little something here for everyone. So as the holiday season begins to reign supreme, ring it in with this decidedly un-holiday season-inspired playlist.

As always, if you’re a local musician interested in being included on the playlist, send us your stuff at [email protected] And please let us know if you’re a San Diego City College alum!

“Hindsight,” released in November, tells the story of a failed relationship, albeit a musical one. Artistic collaboration isn’t always easy, and like all relationships, many musical ones eventually come to an end. And it can really suck.

Emotionally, the track fluctuates between dejected frustration, bittersweet nostalgia and blissful release. It weaves together a bouncing bassline with effervescent synths and crisp acoustic guitars with Brody’s hushed vocals to create a quite dynamic pop song.

Calcutta Kid is the musical moniker of Jessmeet “Jesse” Gulati, “sonic architect” behind long-time San Diego psych rock outfit The Donkeys. Gulati, an Indian-American and City College alum, grew up pulled between the musical worlds of 80’s Bollywood and Sikh spiritual songs, and experimental and underground American music, and the influences show in his work.

The whole album is a treat but I included “Peace (Clouds Scrape the Sunroof)” because of just how good it made me feel. Consisting of three minutes of serene acoustic guitar picking and cinematic synths that at times blossom and at others wilt, it’s dreamlike and meditative in a refreshingly organic way. I could nearly feel the stress dripping off of me. So close your eyes, lean back and float away.

Vocalist and producer Kate Delos Santos has been releasing hooky, ethereal R&B tracks since 2019. Her new single, “Dime a dozen,” is a hazy and enchanting pop song. Drenched in reverb, flourishes of delay and thumping bass, Santos’ voice cuts through the composition with a haunting assuredness.

But Santos isn’t afraid of experimentation. Near the end, the track begins to play with structure, switching elements off and on like a DJ playing with samples. Ultimately it slows down and detunes, giving the whole thing a woozy, telescopic feeling. Keep an eye out for a new EP Delos Santos hinted on Instagram would be released in January.

In recent years the phrase “bedroom pop” has largely gone the way of “indie rock,” which used to denote a band without major label backing and is now just a genre descriptor. But Annie Lein, who’s been making lo-fi, casiotone and theremin infused music akin to early Elvis Depressedly since 2013, makes actual bedroom pop.

It’s intimate, raw, emotive and possesses the sort of hushed intensity I absolutely love about this production style. What really sets Lein apart is the stunningly visual, yet achingly confessional lyrical content. “Hollywood,” on which she divulges, “so I’ve heard that you were dead and I think that might be okay,” is a perfect encapsulation of that heady mixture.

Despite the clearly melancholic tones (Lein in fact lists sad as a genre on Bandcamp) it’s actually a pretty empowering listen. Like someone emerging from darkness rather than being plunged into it.

These two new tracks from Egyptian American multi-instrumentalist Mitchum Yacoub meet on an imaginary beach like two faces of a coin that suddenly saw each other and always knew they were bound at the seam.

“Cumbia Divina” rolls into a classic horn-laden cumbia with just enough grit to start the inner sway. Vocals from Divina Jasso, Yacoub’s housemate-turned-collaborator, are poised and they fold into the soundscape. It’s like meeting a new cumbia that you swear you met before, and then you get on with the dancing, and it’s all fine and warm, and probably there is a war somewhere but for now, it doesn’t matter, and who cares about borders anyway.

“Bansuri” melts you and your fellow genres just the same. Except now you have one foot in Afro-beat and the other in India – the tone of the classical hindustani flute tugs on the memory whether or not it is yours – the sound is nostalgic and unmistakable. This track kindly harks on world-beat sounds and yet it doesn’t feel dusty or stuck in the past, but rather chooses to take a joyful stroll with sounds that can keep you swaying.

At just under two minutes, it’s an adrenaline-shot-to-the-chest that shocks you awake and rattles your teeth. The kind of song that makes you understand why people like to play this music so loud.

“Hit The Breaks,” the first single released from their debut full-length album due out in early 2022, is an angular, frenetic punk song. It doesn’t reinvent the wheel, but it doesn’t need to.

Smiling, the brainchild of Denver-born musician Annie Shaw released its debut album “Devour” in August. It’s a potent, sprawling mixture of post-punk, indie and psych that feels both retro and forward-looking. The band leap from the frenzied punk of title track “Devour,” to the starry night psych of “Take Your Time,” but Shaw’s hazy, siren-esque vocals hover like a layer of mystical fog over it all.

The first single from the album, “Lighthouse,” is an excellent example of the group’s penchant for finding newness in the familiar. It’s a more straightforward track than others on “Devour,” but its soaring guitars, driving bass and booming drums are hypnotic. It also highlights Smiling’s ability to conjure roaring, pulse-quickening walls of sound.

The Sure Fire Soul Ensemble – “Step Down”

It’s yellow outside, and you are wearing yellow glasses anyway, and you haven’t heard yet what a Prius is. When you drive fast, you are going 55 miles an hour. You can feel the texture under your thick rubber tires. Funk. Horns. Soul. Lounge. Vinyl. 35mm Loops.

The Sure Fire Soul Ensemble’s girthy track “Step Down” could be a soundtrack to a vintage film, and yet it is enough aware of its sense of quotation to avoid being ironic. This nine-piece instrumental band turned the heads of contemporary jazz nuts with their latest album “Build Bridges,” and now continues a similar vibe with this new single.

UPDATE: This piece has been updated to acknowledge that Jessmeet Gulati of Calcutta Kid is a City College alum.